Part of the new chookyard.

No more bending for eggs.

Other people adopted pandemic puppies or pandemic kittens, but I finally accepted that the arrangement I had for my chooks for 20 years was really not so clever, even though it sounded really, really ingenious. I held on to the theory of it way longer than I should have.

With a bit of help I moved the chooks and had their enclosure rebuilt using mostly materials I already had.

The old enclosure was on a circular vege garden with a 2 metre radius. One side of the enclosure had a curve following the outer rim of the garden, with the other two sides straight, covering a 1/3 segment of the circle.

The idea was that the chooks dug and poo-ed in their enclosure, then after two months I rotated the whole enclosure around to the next third of the circular garden. The chooks would eat down the plants that had now gone to seed while I would plant the next lot of plants where they had just prepared the bed.

I like to let my chooks roam free. In my small garden, that meant they would eat down my newly-planted veges, jump into the blueberries and eat the new fruit, scratch up the basil in the container gardens…or I would have to leave them behind wire on sunny days when they could be running and climbing.

The new enclosure uses the curved frame from the old one on top of a limestone wall and lets the chooks roam under the almonds and feijoas…. but also has a hatch mechanism so that during the day I can let them out to fossick down three sides of my house. Each side is about a metre from the very high fence -line, with a mulberry courtyard and a lemon-tree courtyard along the way.

I already had the guinea pig cage to shelter them in the yard, but by putting it on top with an access hole in the floor, and adding a front-facing door, I can now collect the eggs without bending down.

Quite a bit of grain-throwing and greens-shaking at the top of the ladder was needed for a couple of days before the chooks would use the new area. 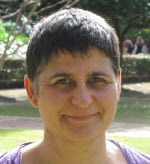 This work is licensed under a Creative Commons Attribution-ShareAlike 3.0 Australia License.